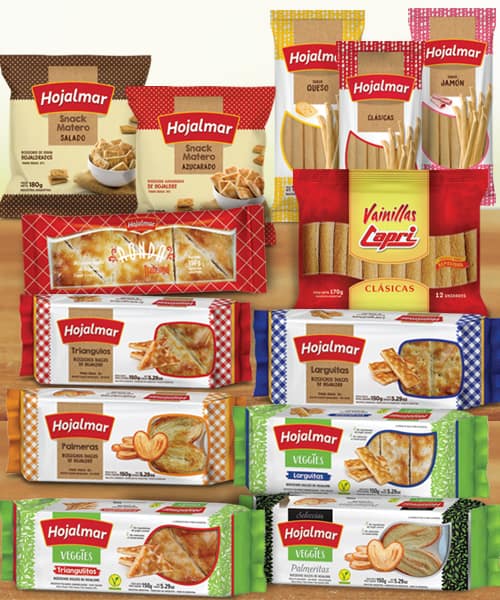 INSPIRED BY THE HISTORY OF THE COMPANY AND WITH THEIR SIGHTS SET ON THE FUTURE, HOJALMAR IS NOW DETERMINED TO CONTINUE THE GROWTH AND INNOVATION NECESSARY TO ACHIEVE THE ABSOLUTE SATISFACTION OF A DEMAND THAT HAS MAINTAINED ITS FIDELITY THROUGHOUT THE YEARS.

In 1960, three young entrepreneurs inaugurate the “La Dolce Vita” bakery. As time goes by, the addition of a fourth partner allows them to purchase a goodwill and begin the mass production of puff pastry cookies: the tortón, the triangulito and, later on, the larguita. In 1970, they acquire their first establishment in east Lanús. In 1981, they take a leap with the incorporation of state-of-the-art machinery. This, along with the accumulated experience in the hand-made production of puff pastry, led to a significant increase in production, all without sacrificing the quality and attributes that would characterize Hojalmar and help it become the leading company in puff pastry. Thanks to this, they begin a path of innovation and automatization that would continue as far as today.

In the 90s, Hojalmar began the exportation of its product. Across the years, their presence has reached countries like Brasil, Chile, Puerto Rico, Honduras, Cuba, USA, Canada, Uruguay, Paraguay and Bolivia, whilst also being present in countries like Singapur, Malasia, Guatemala, Costa Rica, South Africa, Japan, Dominican Republic, Germany and Holland. Exportation generated the need for expansion. Therefore, in 1992, they acquire another property located fourth blocks away from their last one, along with another production line. In 1994, production begins in their 2nd mill. Thanks to this process, new products are made: the palmera, the tortilla negra, the hojalchoc and the snack matero, which join classics such as the triangulitos and larguitas. Finally, in 2009, Hojalmar buys the “Capri” brand and incorporates the production of vainilla in their products.